We have asked some people to write about their sail trip from Colombia Cartagena to San Blas or visa versa. We hope you enjoy reading them as some of the stories are really exciting and you can grab a little bit of information about what to expect on a sailing trip. Their is also quite a lot of useful information on how to plan the trip from land.

Want the same sailing experience as Raoul? Than sailcharter Cush Allways can definitely arrange this.

Planning of the sail trip

I have been backpacking from Colombia to Nicaragua in about three months and one of the highlights of this journey was a visit to the San Blas Islands. We started in Bogota Colombia and then made our way up to Cartagena, which is one of the bigger coastal cities of Colombia. When we arrived here we thought about taking a plane to Panama City because it was very expensive to book a boat tour from Cartagena to Panama, at least we thought so. When searching for plane tickets it became clear to us that the boat trip wasn’t that expensive at all. We paid around 500 US dollars for a sailboat trip from Cartagena to San Blas that would take us seven days. An average plane ticket from Colombia to Panama was around 400 US dollar.

The fact that the sailboat trip wasn’t expensive at all was that it gave us a place to stay on the boat for six nights as well as food and non-alcoholic drinks. This is an average of 83 US dollars a day, which was easily cheaper, then when we had to buy plane ticket, searched for a cheap place to stay and had to buy food and drinks for six days. As the decision was made we went on a sailing trip from Cartagena to San Blas! Excited that we where because we heard really good stories about this journey.

The start of the sailtrip

We started on the second day of Christmas, as this second day was not really celebrated in Colombia. We boarded the sailboat Maluco with the half Colombia half Venezuelan captain around 14:00 p.m. and so this was the start of the journey! We saw the sun going down with the skyline of Cartagena on the back and the open sea in front of us. This was absolutely beautiful as I had never been on open sea before in a sailboat. We were not the only travellers on this boat as we where joined by two women and one man.

As darkness fell the sky became one big playground of stars and the sea a moving body while the moonlight was shining on it. The sea was relatively calm at this moment and we went to bed. In the night I felt that the boat was struggling more against the waves and the next morning I saw why. The waves where bigger, about 6-8 feet at least! As this was making the others seasick the captain and myself took no harm of the waves. A smart tip of advice, don’t forget seasickness pills!! This really helps!

To be honest this day was pretty boring and I was watching flying fish and searching for some sea trash to discover all alone because the others where sick and the captain was sleeping because he had a short night. I took the time to think about the travels I made so far and this was really relaxing. The next day was exactly the same! Nothing to do except for relaxing, enjoying the sun and some bouncing on the waves. This was not as easy as you think because it took some effort to keep standing and sleeping while moving isn’t something you’re used to. 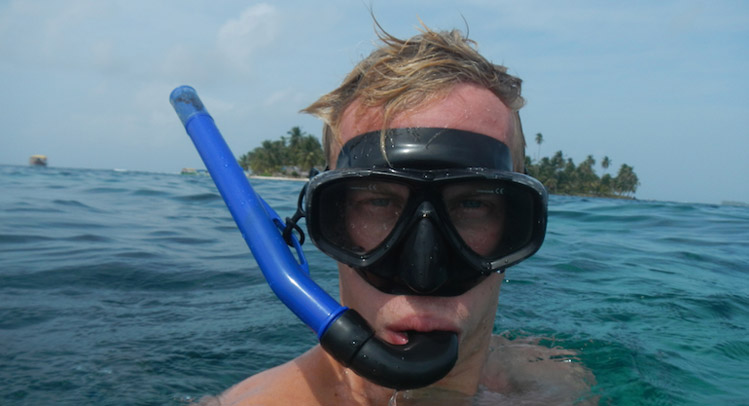 The next day we woke up in the early morning and saw the first Islands of San Blas. The people that where seasick couldn’t wait to get out of the boat on one of the islands. So the captain stopped at a small island that had a few palm trees on it. Here was the first time I touched the land of an San Blas Islands and it immediately become one of my top travel moments of life. A tropical island all by myself! I was stunned and a little bit land sick when standing on the land to be honest.

We spend around two hours on the island and in the water for heading of to El Porvenir to enter Panama legally by getting some stamps in our passports at the customs. This took a large part of the day and we stayed the night in front of island El Porvenir. The sea around this island wasn’t as clear as on other island as what we had seen because of the current. This was day 4 of the journey by the way.

We left the island of El Porvenir in the early morning heading of to Isla Perro or Dog Island in English. The captain said this was one of the best spots to snorkel and swim in the warm crystal clear water. He said you could snorkel in and around a shipwreck of an old gunboat. And he wasn’t lying about anything! The snorkelling was amazing and the shipwreck was filled with coral and fish. The water was so warm I didn’t want to leave it for the beach or the boat, but to bad I had to eat and take a sanitary stop.

After a full day of swimming, snorkelling, chasing fish making underwater photos and movies and jumping of the boat it was time to move to our night location. 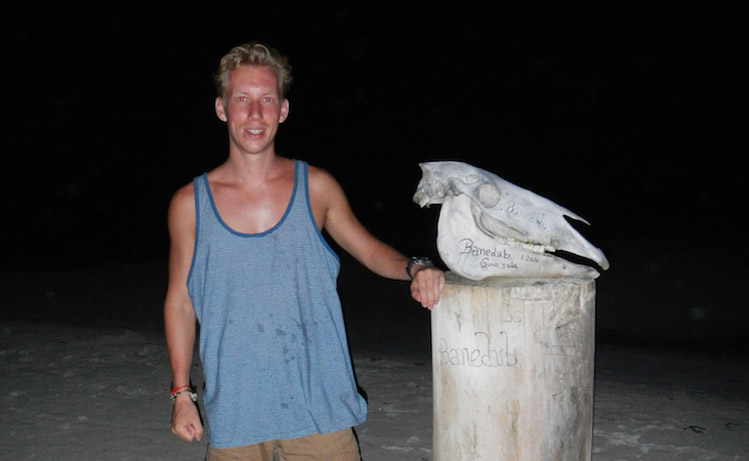 We sailed for about one hour when we put our anchor out. We had arrived at the island of Banedub. After diner we decided to go with the Dingy (small rubber boat) to Banedub and have some fun at the campfire we saw. Paddling hard against the current we finally arrived at the island that was only about 100 meters away from our boat.

We walked on the island and then suddenly the power went off and there was no electricity left for lighting the island. This wasn’t disappointing at all because at that moment I noticed something glowing in the water. And suddenly everywhere in the water there were glowing pieces, like little lights. Our captain told me that this where illuminating squid and jellyfish that only light up around full moon! Lucky as we were it was almost full moon. This was without a doubt one of the most beautiful animal encounters I had in my life, and trust me I have had a couple extraordinary encounters like washing an elephant and literally bumping into sharks while snorkelling.

After a few hours we walked back through the water with flashing lights all around us to the Dingy to head back for the sailboat and get some sleep. This night something shocking happened, the anchor broke and our boat drifted into another boat ramming it really hard. The sound was like a grenade going off. Lucky no real damage was done and only some visual scratches and bumps.

In the early morning we prepared to leave for the island of Chichimei where we would stay and celebrate New Year. We sailed for about 3 hours and passed the famous island with only two palm trees on it that everybody recognized from the Microsoft Windows wallpaper. We laid anchor in front of Chichimei, played some volleyball and walked around on Chichimei. This was a pretty big island compared to the others we visited before. It took us around 15 minutes to get around walking the island.

We chilled the day on the beach and went back for diner at the boat. But the captain had organized something else for us, a traditional meal with the Kuna Indians. So we went with a local Kuna Indian in his big canoe to a nearby island for diner. We got served red snapper with traditional coconut rice. It was good! But I have to say that I had a better red snapper before because they did not spice it up, it was really fresh doo! We slept our last night on the boat and then swapped the boat for a hammock on Chichimei. This was on December the 31st the 6th day of our sail trip.

After spending the day on the beach and snorkelling around in the water with the other 30 tourist that where in San Blas for the New Year. The evening was here. We had a regular diner of fish and rice and then the rum and coco loco’s came. The local Kuna Indians had so many coco loco’s that most people where pretty drunk before it was midnight.

On all the islands we saw campfires and on our island there was a tribe that had a ghetto blaster powered by a diesel engine to get the party started. The local Kuna Indians boys tried to mingle with the foreign girls and we all had fun. The coco loco’s where still coming and going, the campfire grew and the sound of the ghetto blaster attracted many other sailboats in the area.

Then the time was there to leave the 2012 behind and enter 2013 on an epic memorable way. The locals started firing fireworks at 11:45 p.m., which confused some of us but didn’t break the fun of it. The rest of the night is a blur and a mystery. 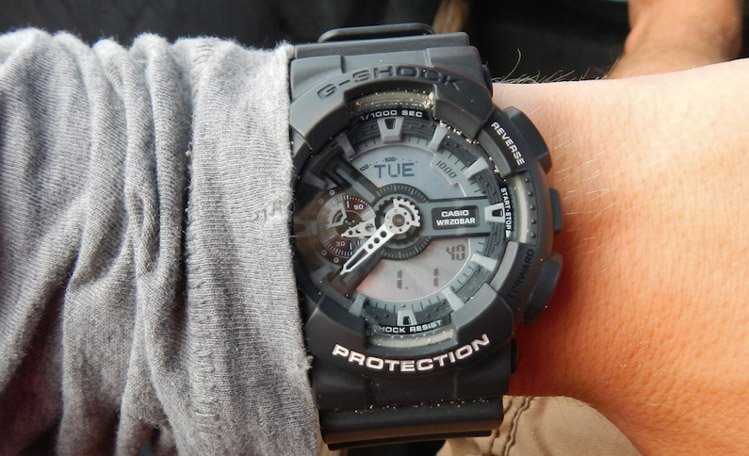 Back to mainland, into Panama!

The party ended around 04:00 a.m. and that was late enough because our water taxi was leaving at 08:00 a.m. and breakfast was at 07:00 a.m.! You don’t believe me right? Well see the picture above of my watch, the picture was taking on open sea in a water taxi. We arrived at the mainland after about two hours in the water taxi.

We hassled a little bit for a 4×4 jeep that was needed for the ride through the jungle back to Panama City. The jungle road was like a rollercoaster and when you are hangover, tired and still land sick this is a pleasant ride I can tell you! But the jungle made up for all of it because it was beautiful and very dense. After three hours of racing the 4×4 jeep driver left us at our new hostel without a sail and sea around it. Welcome to Panama City he told us.

This journey to San Blas is one of the top travel moments in my life! And to San Blas I say; see you soon!