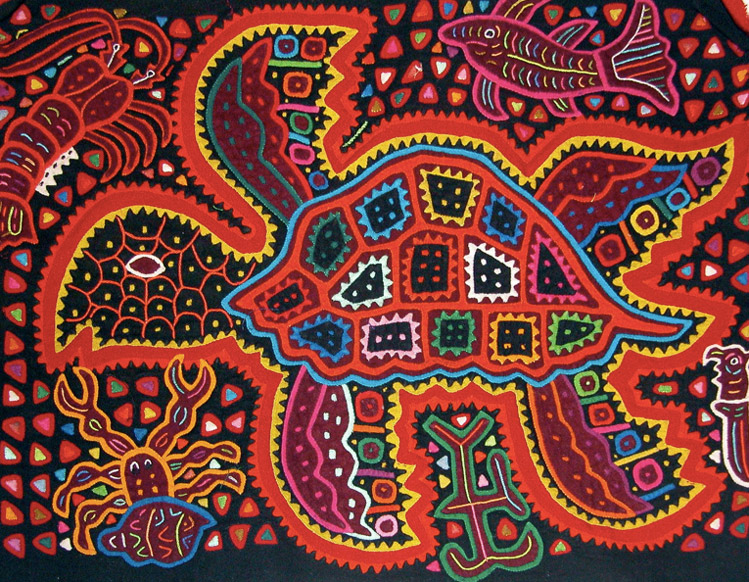 The Kuna have been making their art works for over centuries now and are pretty skilled in it. Because they where a nomad tribe back in the days they did not make much art in forms like statues or buildings but they did decorate themselves with their artworks. This decoration is also called Mola or Molas, in Kuna this means shirt or clothing.

What is a Mola? Mola, which originally meant bird plumage, is the Kuna Indian word for clothing, specifically blouse, and the word mola has come to mean the elaborate embroidered panels that make up the front and back of a Kuna woman’s traditional blouse. 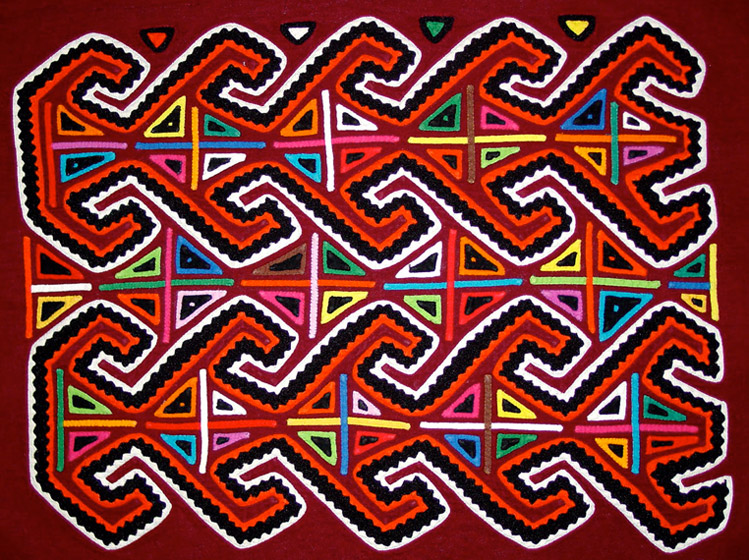 Typical Molas consist of patterned cotton pieces of clothing. A Mola can be a skirt, scarf or t-shirt, but also a piece of arm or leg covering. The quality of a Mola is detriment on the number of layers of cotton that is used and the fineness of the stitching. Cheerful color combinations and zigzag borders are almost in every piece of Mola. These days the Kuna Indians sell their Molas to tourist but not as clothing because they don’t want tourists to wear the traditional clothing. You can buy patches of Molas for wall decoration or for pillows. These days you can buy Molas in Panama or Colombia, it is not allowed to sell Molas outside these countries because they are of cultural heritage and the Kuna’s forbid it.

Read more about the Kuna Mola’s in the doctorate of Diana Marks – The Kuna Mola – Dress, Politics and Cultural Survival

Lifecycle of a Mola – By Diana Marks 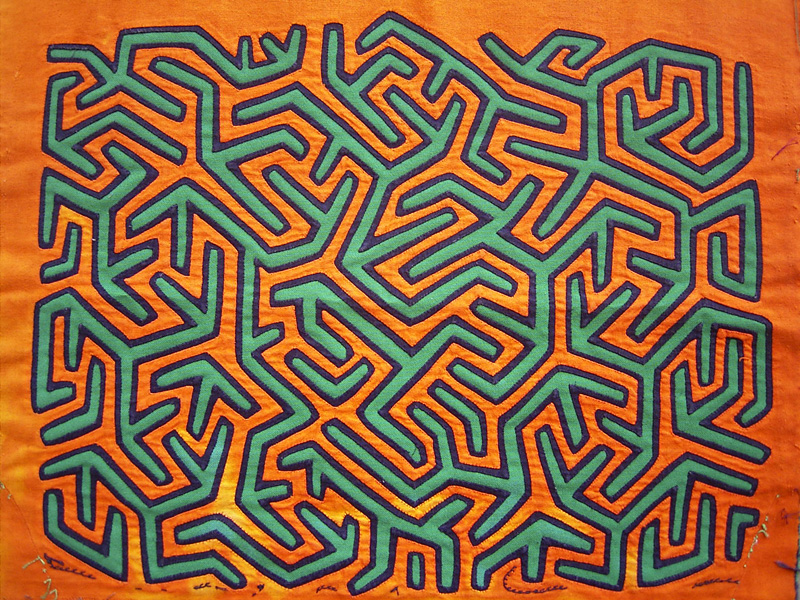 The process of change in function of a mola from part of an item of dress to a tourist souvenir can be understood in terms of the “cultural biography” of an object, an approach proposed by Kopytoff (1986: 66‒83).7 In the case of the mola, this progression as a tradable commodity began soon after its origin, although it did not become a major contributor to income until the 1960s.

Some old mola panels are removed from blouses by Kuna women, then sewn together to form larger rectangles and used to line the walls of their huts. Some are used on the floor, perhaps for babies to lie upon. Smaller blouses made for young girls involve less elaborate work on the panels, and have a short lifespan. Sewn by Kuna women and girls to be worn as part of their dress ensemble, molas were traded for cash from early in the twentieth century, most likely to enable purchase of store goods, such as cloth, food items, and metal objects. Molas in museums were collected in the first two decades of the twentieth century by Americans living in or near the Panama Canal Zone who visited the San Blas islands, by adventurers sailing in the area, and also by anthropologists carrying out research. Some of these were likely to be molas no longer deemed fit to wear, although some molas in early collections show no evidence of wear.

Molas specifically “made for trade” began to appear in the 1960s and this is well documented (Tice 1995: 63‒64). The US Peace Corps volunteers assisted Kuna women in establishing “Mola Co-ops” to design, sew, and market molas targeting the tourist market. I elaborate on this type of souvenir mola below. Mola commercialization became a significant contributor to household incomes and changed the role and status of Kuna women. This is similar to handcrafts produced by other indigenous women: it has been found that “manufacturing souvenirs can help empower women socially, psychologically and economically” (Swanson and Timothy 2012: 493), although there can also be negative consequences, including pressure to produce. 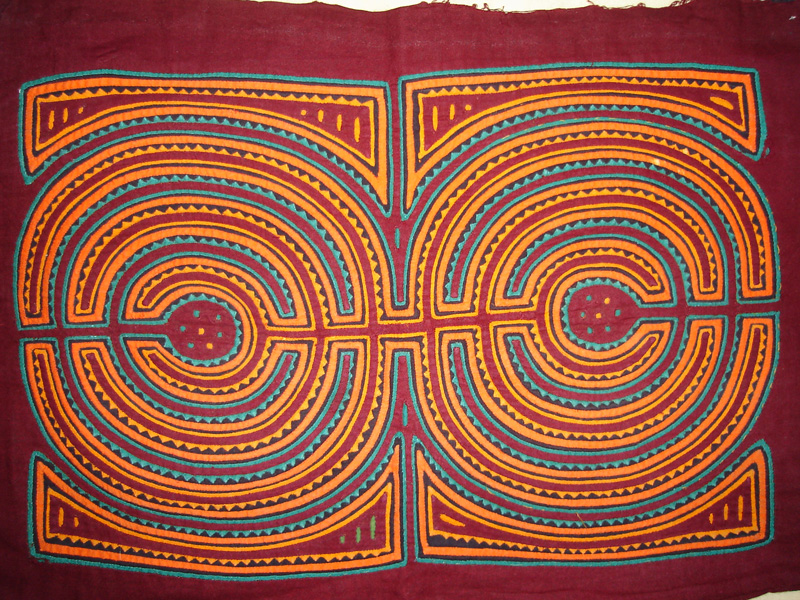 Molas may be sold by Kuna women and men directly to visitors to the Kuna Yala islands, including cruise ship passengers and other international visitors to Panama, and until 1999, day visits by US residents from the Panama Canal Zone. Kuna men working in the former Canal Zone were also intermediaries, as well as Kuna women and men living in Panama City. Some non-Kuna residents of Panama City and the Canal Zone became re-sellers, operating from shops in Panama City which attracted tourists interested in indigenous handcrafts.

Molas purchased by US citizens living in the Canal Zone, and by tourists, especially US tourists, are found in many museum collections of molas, often donated many years after acquisition. The other major source for museums relates to collections made by anthropologists and other researchers who spent time in the San Blas, including during museum expeditions. Some of these latter collections of molas were also obtained through intermediaries, not directly from the Kuna people, creating difficulties in determining provenance of many collections, particularly reliable dating.

In addition to face-to-face purchases, returning tourists wishing to add to their collections use online shopping avenues. Whilst museums in most cases rely on donations, individual collectors are known to build on collections established as short-term tourists or longer-term expats working in the Canal Zone or major Panamanian cities. Serious collectors are known to make multiple collecting trips to Panama, generally making visits to the San Blas archipelago, and then adding to collections using additional channels.

Molas as souvenirs – By Diana Marks 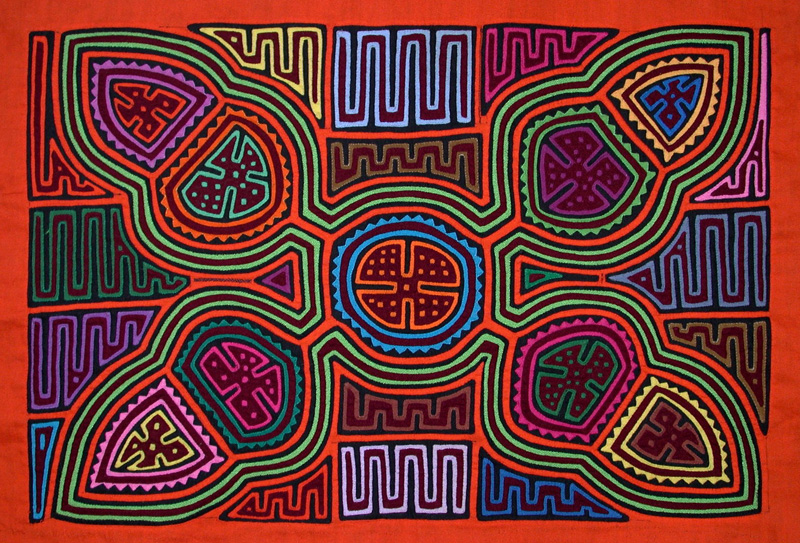 Visitors to Panama associate the Kuna women seen wearing, and perhaps seen sewing, mola blouses with their purchase of a mola. Passengers on cruise ships are able to see Kuna women living on the Atlantic coast of Panama, and in Panama City there are a number of outlets where Kuna women, also wearing the full dress ensemble, sell molas. Purchases made directly from Kuna women, and sometimes Kuna men, provide authenticity to the acquisition of a mola. Regardless of whether there is an understanding that the mola panel originated as part of a blouse, the perceived value of the mola is increased because it was sewn by an indigenous woman.

Whilst the “commodification of ethnic arts” such as molas into “tourist souvenirs” (Swanson and Timothy 2012: 494‒495) may result in a loss of cultural meaning, I do not consider this will result in the demise of the mola. Molas continue to be designed and sewn by Kuna women, even when expressly “made for trade” and this is similar for other handcrafted ethnic objects. Belk and Groves (1999: 29) note that “ ‘commoditization’ and meaning change do not necessarily imply that artists, intermediaries, or consumers are harmed by these alterations” where there is “movement from cultural to aesthetic interpretations,” and cite examples involving Australian aboriginal art, Tibetan Buddhist thankas, and Iranian Islamic prayer rugs.

The meaning of the mola is polyvalent to Kuna communities and to mola collectors. I believe that the benefits of promoting molas as Panamanian souvenirs include the continuation of this form of textile craft and encouragement for high quality production. The authenticity of molas may be important to tourists who purchase them “in an attempt to experience the authenticity, vitality, and spirituality” not encountered in their homeland and also the “childlike” attraction of the exotic (Belk and Groves 1999: 30).

Many Kuna men and women wear a form of Western clothing, including mass-produced t-shirts much of the time. The incentive to continue to sew molas also includes an incentive to display molas as a worn item of dress, which supports cultural identity and cultural continuity whilst at the same time demonstrating an item which is for sale as a souvenir, albeit generally only an individual mola panel, not a complete blouse.