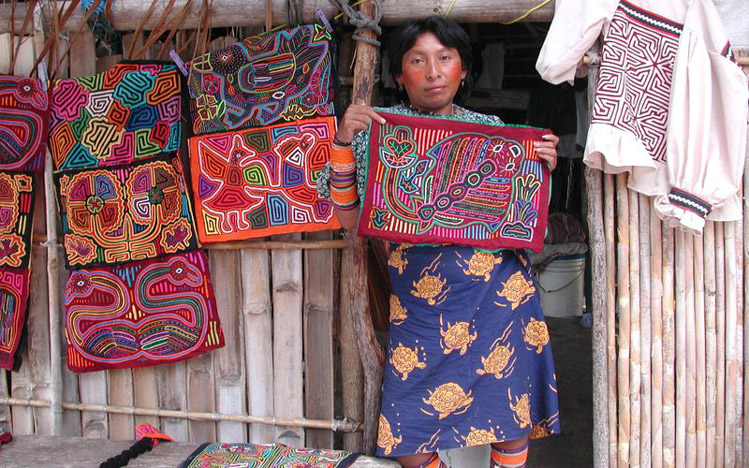 We will help you understand the history of San Blas, formally Kuna Yala region, by following a chronological order of events. The story starts by telling you where the Kuna’s came from and why they inhabited the San Blas Islands.

The history of San Blas starts around 500 years ago

Around 500 years ago the Kuna’s where living in the Darian Gap that is now the border jungle of Panama and Colombia. This was a very dense jungle that made moving through very difficult and trading with other communities rare. In order to flourish the Kuna’s decided to go up north/west into Panama. We’re now arriving at the years 1650-1750 when the Spanish already occupied many places around that area. The Spanish conquistadors called the Kuna Yala region a pirate zone with many places to hide. The Kuna’s did not bother the pirates and where slowly starting to settle among the island trading with the Pirates and Spanish explorers.

The first real settlements of the Kuna were build on the Islands of San Blas around the year 1800. The Kuna had plenty of food and trade roots with different families, pirates and explorers, which benefited the growing of the community. Another important historical event that did not stop this growth in their community was that the islands had no jungle diseases that kept the numbers of Kuna people low in the years before because of deadly illnesses. These days the Guna receive healthcare of the Panamanian government if they need it. Yet, these days the numbers of the native Guna’s are declining since many leave to earn money outside Guna Yala.

In 1903 Panama became an independent country but the Kuna did not want to be part of Panama and where protesting against the new Panamanian government. In 1925 the Kuna communities gained the status of an independent state within Panama. This gave them more influence over their own culture and rules. In 1938 the Kuna made their own constitution called “La Carta Organica de San Blas”, which was approved officially approved by the Panamanian government in 1945.

Since 1940 no tourist where allowed in San Blas

No tourist and scientist where allowed in the Kuna empire until the late 1940’s. After the 1940’s they began to open the borders and the first tourist followed the scientist, mostly anthropologists where visiting the San Blas. Nowadays the San Blas Islands are open for tourist and the Kuna run a pretty good tourist business. But after all these years they still keep tight control over their own people and cultural legacies, which resulted in a strong preservation of nature and culture in San Blas.